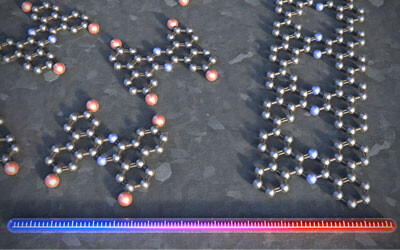 A team of physicists and chemists has produced porous graphene ribbons in which specific carbon atoms in the crystal lattice are replaced with nitrogen atoms. These ribbons have semiconducting properties that make them attractive for applications in electronics and quantum computing, as reported in the Journal of the American Chemical Society.

Graphene consists of a single layer of carbon atoms arranged in a honeycomb structure. The material is of interest for various applications given its unique properties, which include excellent electrical conductivity as well as astonishing strength and rigidity. Research teams around the world are working to further expand these characteristics by substituting carbon atoms in the crystal lattice with atoms of different elements. Moreover, the electric and magnetic properties can also be modified by the formation of pores in the lattice.

Now, researchers led by Professor Ernst Meyer from the University of Basel and Dr Shi-Xia Liu from the University of Bern have succeeded in producing the first graphene ribbons whose crystal lattice contains both periodic pores and a regular pattern of nitrogen atoms. The structure of this new material resembles a ladder, with each rung containing two atoms of nitrogen.

In order to synthesise these porous, nitrogen-containing graphene ribbons, the researchers heated the individual building blocks step by step on a silver surface in a vacuum. The ribbons are formed at temperatures up to 220°C. Atomic force microscopy allowed the researchers not only to monitor the individual steps in the synthesis, but also to confirm the perfect ladder structure — and stability — of the molecule.

Using scanning tunnelling microscopy, scientists at the University of Basel also demonstrated that these new graphene ribbons were no longer electrical conductors, like pure graphene, but actually behaved as semiconductors. Colleagues from the Universities of Bern and Warwick confirmed these findings by performing theoretical calculations of the electronic properties.

“The semiconducting properties are essential for the potential applications in electronics, as their conductivity can be adjusted specifically,” said the University of Basel’s Dr Rémy Pawlak, first author on the study.

From the literature, it is known that a high concentration of nitrogen atoms in the crystal lattice causes graphene ribbons to magnetise when subjected to a magnetic field. The researchers thus expect their porous, nitrogen-doped graphene ribbons to display “extraordinary magnetic properties”, Prof Meyer said.

“In the future, the ribbons could therefore be of interest for applications in quantum computing.”

Image caption: The individual building blocks are heated on a silver surface in order to synthesise a porous graphene ribbon that exhibits semiconducting properties and a ladder-like structure. In each rung of the ladder, two carbon atoms have been replaced with nitrogen atoms (blue). Image credit: University of Basel, Department of Physics.

Researchers have developed a visible light communication set-up, capable of a data rate of 2.2...

An organic material that is thin, bendable and powerful could be used to create the next...

Researchers have fabricated red LEDs, based on the blue-emitting semiconductor indium gallium...